In a few days, I will be in Europe and in about a week or so I’ll be in Paris celebrating my baby’s birthday. I found this article “The 25 Most Beautiful Places in Paris” which I think is a cool to do list for us while we’re there. You should also check them out if you’re in town.

The Palais Garnier is a 1,979-seat opera house, which was built from 1861 to 1875 for the Paris Opera. It was called the Salle des Capucines, because of its location on the Boulevard des Capucines in the 9th arrondissement of Paris, but soon became known as the Palais Garnier, in recognition of its opulence and its architect, Charles Garnier. The theatre is also often referred to as the Opéra Garnier and historically was known as the Opéra de Paris or simply the Opéra, as it was the primary home of the Paris Opera and its associated Paris Opera Ballet until 1989, when the Opéra Bastille opened at the Place de la Bastille. The Paris Opera now mainly uses the Palais Garnier for ballet. The Palais Garnier has been called “probably the most famous opera house in the world, a symbol of Paris like Notre Dame Cathedral, the Louvre, or the Sacré Coeur Basilica.” (Source: Wiki)

The Arc de Triomphe de l’Étoile is one of the most famous monuments in Paris, standing at the western end of the Champs-Élysées at the center of Place Charles de Gaulle, formerly named Place de l’Étoile — the étoile or “star” of the juncture formed by its twelve radiating avenues. (Source: Wiki) 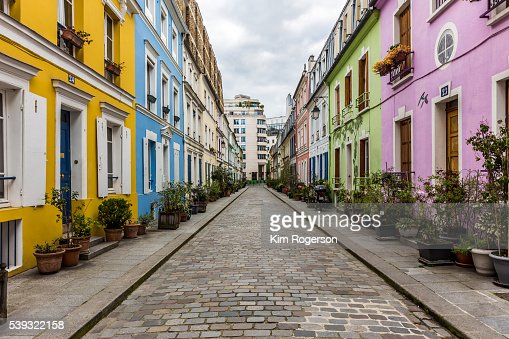 There is a street in Paris that is all about colour and how sweet life can be. Its name is Rue Crémieux, and its inhabitants would surely prefer that we not reveal it to you because it is a little corner of paradise.

A pedestrian street with private houses… This charming street is located in the 12th arrondissement, between Rue de Lyon and Rue de Bercy. It is a little street, 144 metres long, that is pedestrianised and cobblestoned and gives visitors the impression that they have left Paris behind. There are no Haussmann style buildings here, only unquestionably charming little houses. Their particularity is that the façades are mainly in gentle pastel colours. From the green at number 21 to the blue at 22, the purple at 23, the yellow at 24, the pink at 30… And when the colours are not attracting your eye, it will be drawn to the trompes l’œil that decorate the façades, with a cat hunting delicately painted birds or a lilac that surrounds an entrance. Animals of the feline variety (real ones) must think themselves in the countryside among the flower pots that are lined up outside the houses and visitors will have a similar feeling over the course of this short, but delightful stroll.

A lovely spot for a picture… Rue Crémieux is beginning to fall victim to its success and you may well not be the only one taking photographs in this street whose façades are reminiscent of Portobello in London or Burano in Venice. The light plays with the colours all day long, so much so that fashion bloggers have made it their favourite spot for presenting the latest outfits. Here’s some advice so that this little piece of paradise remains one – be discreet! Rue Crémieux 75012 Paris

Musée d’Orsay’s ceiling, a reminder of its past as a train station

The Louvre Pyramid (Pyramide du Louvre) is a large glass and metal pyramid designed by Chinese-American architect I.M. Pei, surrounded by three smaller pyramids, in the main courtyard (Cour Napoléon) of the Louvre Palace (Palais du Louvre) in Paris. The large pyramid serves as the main entrance to the Louvre Museum. Completed in 1989,[1] it has become a landmark of the city of Paris.  (Source: Wiki)

Also, check this out for Things to Do & Places to See in Paris.

Turning Tears and Laughter into Words

Thought Catalog is a digital youth culture magazine dedicated to your stories and ideas.

The Showers of Blessings

Spreading peace and love. Sharing my thoughts on life.

On leaving my job, traveling the US, and finding our new home

Life is hard enough,don't go through life with pain that’s keeping you clutching the steering wheel. Join me as I share with you my life of living chronically grateful while living with chronic pain.

The Voices In My Head

All my random thoughts...

Inspiration for the Parched Soul

"Your brain has rewired itself because of this."