I have made a new friend… I can say he’s one of the smartest guys I’ve ever known. He’s pretty deep and he blows my mind with the stuff he says. I usually ask him, how’d you come up with this shit? LOL    He’s not only smart… he’s funny, witty and easy on the eyes. Have I ever mentioned that I’m sapiosexual? haha  😉

Anyway, he gave me a CD… he’s been busy promoting this new album his group just recently released. I played it while driving home and I liked it. But the cover got me curious so I googled it as soon as I got home. 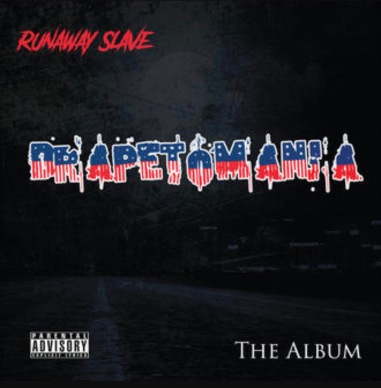 Please check it out… click on the link. Runaway Slave

You may listen and download his music from this site or on iTunes.

It’s quite interesting and entertaining. Promise!

Drapetomania was a conjectural mental illness that, in 1851, American physician Samuel A. Cartwright hypothesized to cause Black slaves to flee captivity. It has since been debunked as pseudoscience and part of the edifice of scientific racism. (Source: Wiki)

In Diseases and Peculiarities of the Negro Race, Cartwright points out that the Bible calls for a slave to be submissive to his master, and by doing so, the slave will have no desire to run away. Cartwright described the disorder – which, he said, was “unknown to our medical authorities, although its diagnostic symptom, the absconding from service, is well known to our planters and overseers”– in a paper delivered before the Medical Association of Louisiana that was widely reprinted. He stated that the malady was a consequence of masters who “made themselves too familiar with [slaves], treating them as equals”. (Source: Wiki) 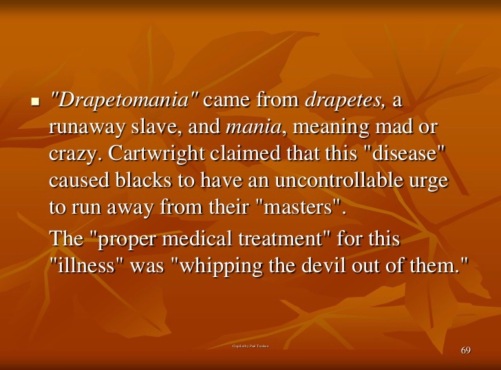 DRAPETOMANIA, OR THE DISEASE CAUSING NEGROES TO RUN AWAY.
It is unknown to our medical authorities, although its diagnostic symptom, the absconding from service, is well known to our planters and overseers…
In noticing a disease not heretofore classed among the long list of maladies that man is subject to, it was necessary to have a new term to express it. The cause in the most of cases, that induces the negro to run away from service, is as much a disease of the mind as any other species of mental alienation, and much more curable, as a general rule. With the advantages of proper medical advice, strictly followed, this troublesome practice that many negroes have of running away, can be almost entirely prevented, although the slaves be located on the borders of a free state, within a stone’s throw of the abolitionists.

If the white man attempts to oppose the Deity’s will, by trying to make the negro anything else than “the submissive knee-bender,” (which the Almighty declared he should be,) by trying to raise him to a level with himself, or by putting himself on an equality with the negro; or if he abuses the power which God has given him over his fellow-man, by being cruel to him, or punishing him in anger, or by neglecting to protect him from the wanton abuses of his fellow-servants and all others, or by denying him the usual comforts and necessaries of life, the negro will run away; but if he keeps him in the position that we learn from the Scriptures he was intended to occupy, that is, the position of submission; and if his master or overseer be kind and gracious in his hearing towards him, without condescension, and at the sane time ministers to his physical wants, and protects him from abuses, the negro is spell-bound, and cannot run away. 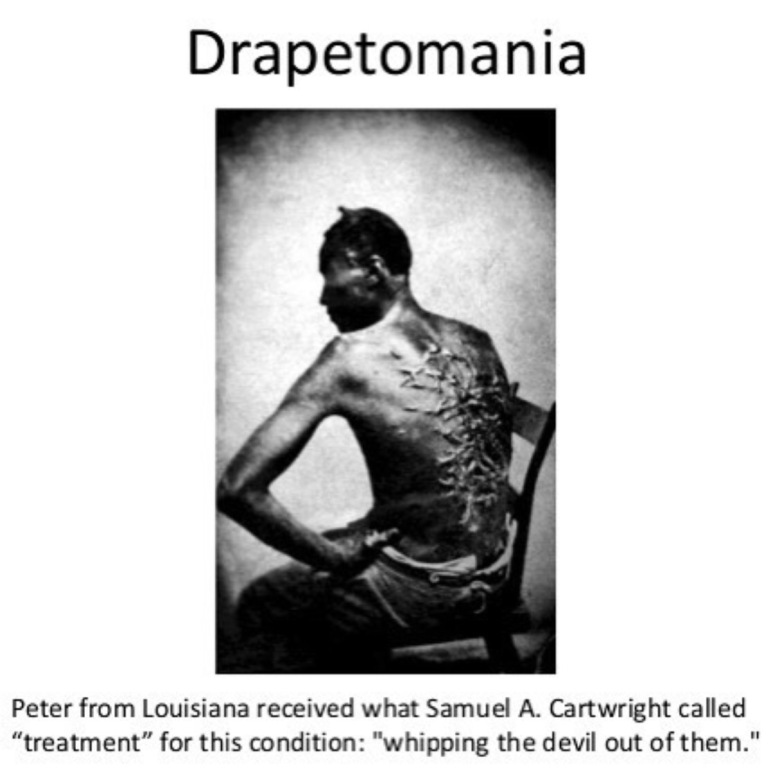 According to my experience, the “genu flexit“–the awe and reverence, must be exacted from them, or they will despise their masters, become rude and ungovernable, and run away. On Mason and Dixon’s line, two classes of persons were apt to lose their negroes: those who made themselves too familiar with them, treating them as equals, and making little or no distinction in regard to color; and, on the other hand, those who treated them cruelly, denied them the common necessaries of life, neglected to protect them against the abuses of others, or frightened them by a blustering manner of approach, when about to punish them for misdemeanors. Before the negroes run away, unless they are frightened or panic-struck, they become sulky and dissatisfied. The cause of this sulkiness and dissatisfaction should be inquired into and removed, or they are apt to run away or fall into the negro consumption. When sulky and dissatisfied without cause, the experience of those on the line and elsewhere, was decidedly in favor of whipping them out of it, as a preventive measure against absconding, or other bad conduct. It was called whipping the devil out of them.

If treated kindly, well fed and clothed, with fuel enough to keep a small fire burning all night–separated into families, each family having its own house–not permitted to run about at night to visit their neighbors, to receive visits or use intoxicating liquors, and not overworked or exposed too much to the weather, they are very easily governed–more so than any other people in the world. When all this is done, if any one of more of them, at any time, are inclined to raise their heads to a level with their master or overseer, humanity and their own good require that they should be punished until they fall into that submissive state which it was intended for them to occupy in all after-time, when their progenitor received the name of Canaan or “submissive knee-bender.” They have only to be kept in that state and treated like children, with care, kindness, attention and humanity, to prevent and cure them from running away. (Source: PBS SoCal)

I feel a little smarter knowing this. There’s a word for that?!?! And It’s actually a legit psych diagnosis that people bought. Whaaaat?!?!

I can’t wait to talk to my Psychiatrist friends and find out if they know anything about this. Give them a little bit of history and Psych Dx lesson 😉

One thought on “Drapetomania”

Thought Catalog is a digital youth culture magazine dedicated to your stories and ideas.

The Showers of Blessings

Spreading peace and love. Sharing my thoughts on life.

On leaving my job, traveling the US, and finding our new home

Life is hard enough. Don't go through life with pain that’s keeping you clutching the steering wheel. Join me as I learn to deal with Adrenal Fatigue-Hashimoto’s- Hypothyroidism-OA- Osteonecrosis – Spondylolisthesis and how going to a mostly to a plant-based lifestyle and meditation helps my pain.

Mental illness stigma and connection with those struggling with chronic pain

The Voices In My Head

All my random thoughts...

Inspiration for the Parched Soul

"Your brain has rewired itself because of this."